This is a special type of glazed pottery with hand-painted colour overlay.

The Thai term “benjarong” is a compound word meaning five colours. The usual colours employed are red, white, yellow, black and green. However, there are some examples in this group with only three colours and others with as many as eight.

According to history, the prototype for this glazed pottery came originally from China. King Rama I of the Chakri Dynasty sent a group of Thai artisans to China to learn the art for home production.

This glazed pottery was originally only affordable by royalty and the nobility but has become progressively become more and more popular.

A later development was to add gold embellishment which resulted in a new design with the descriptive name “lai namthong” (lai = design, namthong = liquid gold). This is time consuming work which requires extra skill and mastery on the part of the craftsman.

These products are thus more exclusive than the traditional type and are often given as gifts to important people and foreign guests. Thai Lotus Restaurant is proud to present the prestigious “lai namthong” benjarong for your enjoyment. 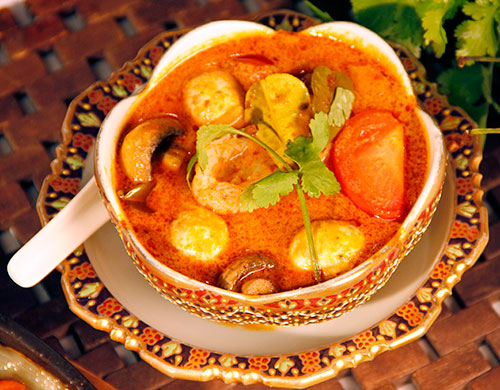